Data presents us with enormous opportunities. However, it also raises many new issues. This Data Agenda Government focuses on how data is used within our society and addresses the proper and responsible use of data by the government.

Everyone in the Netherlands uses and produces data, often without thinking about it. We search for somewhere new to live, post on social media, take the bus and use our access passes to enter our offices. This means we all generate a substantial digital trail. Because collecting, storing, sharing and processing of data is becoming increasingly cheaper, the volume of data is increasing at a dizzying pace. The ever-increasing impact of data on our lives is also referred to as datafication. This datafication is swiftly changing our world.

Datafication is closely linked to the emergence of new technologies, such as artificial intelligence and connecting devices to the internet (the ‘Internet of Things’). Smart applications of data and technology can improve the quality of our lives. They can make life easier, for example, by providing an automatically pre-filled tax return. Data are also necessary to resolve contemporary issues ranging from improving health care and education to optimising ‘critical infrastructures’ like transport and energy.

Using big data analysis, the Department of Public Works and Water Management (Rijkswaterstaat) is able to predict more effectively when asphalt requires maintenance work. These improved predictions allow the Department to create more efficient maintenance schedules for our national roads. This results not only in cost savings, but also in less traffic disruption, improved road safety, a reduction in CO2emissions, a reduction in raw material and energy consumption and a reduction in noise pollution.

At the same time, however, datafication raises many new questions about public values and fundamental rights. How do we prevent the unwanted influence of fake news? How do we prevent the use of robotics and artificial intelligence from undermining human rights? How do we safeguard the autonomy and privacy of every citizen? The government wants to use the enormous social and economic opportunities that data provide, but at the same time, greater datafication must not come at the expense of individual citizens and entrepreneurs.

Companies are now setting the standard for providing excellent service to consumers: fast, simple, personalised and always available. The government cannot and will not lag behind. However, we must also ensure that everyone remains able to participate in the digital society. We will, therefore, protect the rights of all citizens and entrepreneurs if these new developments place them under pressure. Citizens and entrepreneurs deserve no less from us.

Closeup side view of group of mid 30’s web designers working on a project. They are gathered around desktop computer and discussing a project. One of the guys is explaining something and pointing at computer screen. There are two men in focus and some blurry coworkers in background.

Joint approach in the public sector

Digitalisation impacts society as a whole; therefore, it is a cabinet-wide topic. In 2018, the government published the Dutch Digitalisation Strategy: the overarching strategy for everything relating to going digital.

As part of the cabinet coalition agreement, it was agreed that the government will develop an ambitious, cabinet-wide agenda for continued digitalisation of the various levels of the public sector. That agenda was launched in 2018: NL DIGIbeter, Digital Government Agenda. NL DIGIbeter puts into practice the Dutch Digitalisation Strategy for the public sector. NL DIGIbeter states that the government must fulfil an exemplary role in dealing effectively and responsibly with data, and it was used to announce this Data Agenda Government.

As mentioned in NL DIGIbeter, this Data Agenda Government sets out that: ‘What the government as a whole is going to do to improve its handling of personal data, open data and big data. We are going to look at how the analysis and combining of government data can benefit policy-making and provide solutions to social issues. We will make better use of the possibilities offered by data and, in doing so, will also take into account rights and values.’

Central and local government are jointly responsible for implementing the Data Agenda Government. The Ministry of the Interior and Kingdom Relations plays a coordinating role in this respect, based on its responsibility for digital government and the safeguarding of fundamental rights.

At the same time as this Data Agenda Government, work has been carried out by the Ministry of Economic Affairs and Climate Policy in formulating the Dutch vision on data sharing between companies (De Nederlandse visie op datadeling tussen bedrijven). Whereas the focus of this data agenda is on government bodies, the focus of the data-sharing vision is on companies. The two policy documents are closely related and so have been drawn up in close collaboration. Another policy document related to this Data Agenda Government is the vision shared by the municipalities on taking a data-driven approach. The task of drawing up this policy in 2019 falls to the Association of Netherlands Municipalities (VNG).

These departments within national government are developing policies relating to datafication. The Minister for Education, Culture and Science and the Minister of Health, Welfare and Sport have presented to the Dutch Lower House their visions on big data for education and health care; respectively. In October 2018, the Lower House also received a letter from the Minister for Legal Protection concerning the transparency of algorithms used by the government. In 2018, the Ministry of Justice and Security launched the National Cyber Security Agenda.

Coordination between the various initiatives relating to data and data policies is crucial. This will ensure that the various actions support each other and that we, as the government, are actually making progress. This agenda focuses on general bottlenecks in datafication and the measures that transcend individual organisations and sectors in the public sector. Furthermore, this agenda is the vehicle used by the Ministry of the Interior and Kingdom Relations to set out the government’s ambition to maximise the opportunities offered by data while respecting public values.
Where this Data Agenda Government refers to ‘we’, this refers to all public sector bodies that have committed themselves to the various activities set out in this agenda. In drawing up this agenda, we spoke to researchers and representatives from the business community, in addition to representatives from the public sector.

In this Data Agenda Government, we are consciously making use of the knowledge and experience of the forerunners in data-driven approach. Not only will we take practical measures, but in the coming years, we will also investigate where the data use in our society still requires the drafting of additional policies. Internationally, we see major differences in the way the public and private sectors operate in the area of data. In the United States, it is mainly the (social) platforms and business that are shaping the data economy. In other parts of the world, such as China, the government plays a central role: it uses data to mould its relationship with its citizens. In the Netherlands and in Europe, the business community as well as government are driving the use of data in society.
Privacy protection plays a significant role in European regulations on data traffic.
Both within the public and the private sector, many different parties are tackling the opportunities presented by a data-driven approach. This continuously raises questions. When does the government need to act as a facilitator and when does it need to act as a regulator? How can the government use people’s data as a tool for implementing policies?

Analyses by the Statistics Netherlands (CBS) show that social media can provide an accurate picture of citizens’ views on a wide variety of topics (the ‘sentiment’). Over longer periods, this picture almost perfectly matches the traditional CBS consumer confidence index. Sentiment analysis based on social media is a faster and more efficient alternative to the traditional consumer confidence index.

When it comes to collecting data on citizens in the public domain, the government is ‘only’ one of the parties involved. There is an increasing trend to use sensors, also by commercial parties. Can the government use this data to direct the behaviour of its citizens? The government must — in consultation with society and the business community — determine where the boundaries are for using data.

‘How can we make young people more aware of how they handle their data?’ 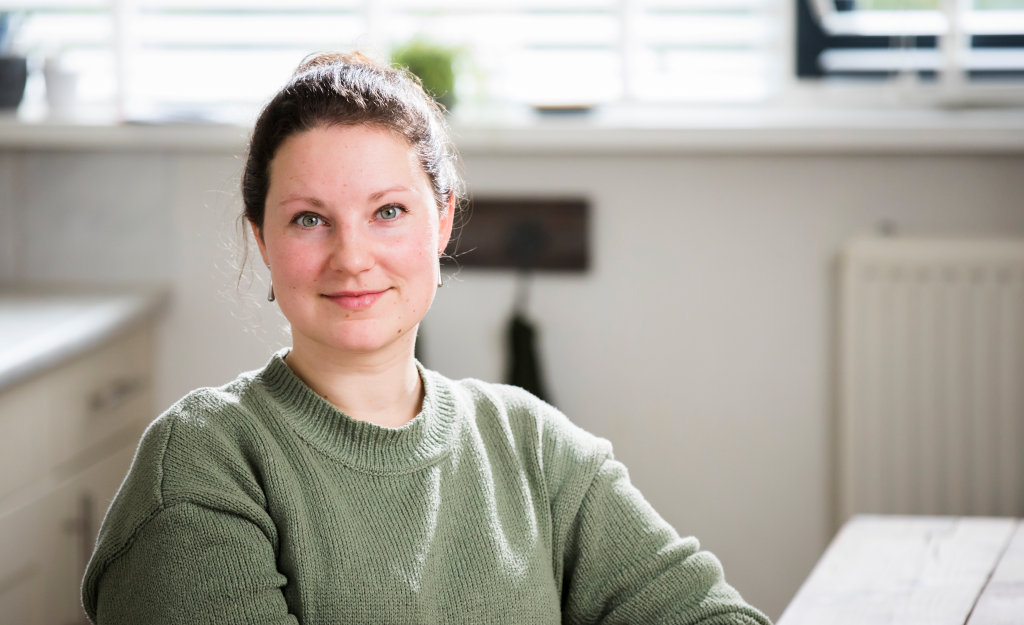 I think that my students sometimes underestimate what organisations are able to do with all the data collected about them. Even amongst themselves, they are often too trusting. They share all kinds of things online but they don’t think about the consequences, for example, when they fall out with their friends. Who will make sure that these young people become aware of the role data plays in society? I think that teachers as well as parents play a major role in this. As a teacher, I‘ve noticed that parents often don’t know enough about the topic. Perhaps the government can play a part in this: how can the government make sure that parents learn more about aspects such as data and privacy? Personally, I think long and hard before I post a picture of my children online. You never know where it will end up and how it will be used’.
Joanne Petersen, mother of three children and teacher at De Goudse Waarden in Gouda

Datafication requires that we make constant improvements and work continuously on the framework conditions. This agenda is not a blueprint. Every year, we will review what is needed in the broad area of data in the public sector and the impact of data on society. We will make changes to the Data Agenda Government based on any new insights provided by those reviews. Data in the public domain is the first theme that we will focus on; in the coming years, we will add new themes to the agenda. For every theme that we address, our approach will be aimed at protecting fundamental rights and public values. We will monitor the effect of the initiatives set out in this agenda on the government and society. This agenda lays the foundation for the government’s data policy for the coming years.

The Ministry of the Interior and Kingdom Relations has issued a special edition of Donald Duck.. It covers various topics related to digitalisation, including new technological developments and their impact on public values. This special edition is aimed at making children aged 7-12 aware of the opportunities as well as threats of digitalisation, in a format that appeals to them.

New regulations and agreements about data in the public domain

Social dialogue on the proper use of data in the public domain will remain an ongoing process at the central and local level in 2019 and beyond.